Are you what you read? Author Deborah Harkness shares how she uses reading material to better understand her characters and the times in which they live.

Nineteenth century French physician Anthelme Brillat-Savarin may have said you are what you eat. (Dis-moi ce que tu mange, je te dirai ce que tu es in case you’re wondering.) But Deb Harkness has a literary version of that adage: You are what you read. And she uses it to better understand both her characters and their time periods when she writes her bestselling novels.

Deb talked about this strategy at All Souls Con, an annual celebration of her All Souls trilogy that, if you’ve never attended, you should mark your calendar right now for next year and change that. She started her talk asking the audience to close their eyes and conjure up a memorable experience as a reader. “When I say you are reading, where are you reading, what are you reading, how are you reading?” she prompted.

Understanding the whys and wherefores, the experiences of reading rather than the list of books and pamphlets that someone has read, can be elusive for historians of the book like Deb. After all, social media and Goodreads don’t exactly have historical equivalents. “I want to know how people read in the past,” she said. “What was that act of reading actually like, the visceral moment? What was it about reading that was so magical? That question is woven through all the All Souls books. I feel like I know all of you because we shared the act of reading.”

She shared her most memorable reading experience. It was 1973 and she was visiting her cousins in England for the first time. Her Aunt Sylvia gave her her mother’s copy of Anne of Avonlea. Deb flipped open the book and saw her mother’s name written in the front along with a drawing. “I didn’t know my mother could draw,” she said, noting the book smelled like toffee. “I sniffed that book. I felt instantly transported and connected to my mother and this whole family in England I had never met before.”

As a historian, Deb got intrigued by this idea that reading can shape a person’s — or character’s — life while studying John Dee’s copy of Marsilio Ficino’s Platonic verses. Dee is a 16th century English mathematician, astronomer, astrologer, occult philosopher, philosopher, and advisor to Queen Elizabeth 1. He spent much of his life studying alchemy, divination and Hermetic philosophy. Ficino is a 15th century Italian scholar and Catholic priest.

Anyway, Deb opened Dee’s copy of Ficino’s text and saw all kinds of writing in the margins. “No, no, no” she said, listing Dee’s responses to Ficino’s thoughts, including one that said, “No, no, Ficino.”

She realized she needed to probe beyond simply just reader response in order to understand how books shape people. “Despite our lack of evidence, we are shaped by the books we read and share,” she said. “Is Diana what she reads? Literally yes.”

But it was reading Books of the Brave by Irving Leonard that really gave Deb her aha moment about books and people. The book is an account of books and men in the Spanish Conquest and settlement of 16th century New World. While the deeds the men committed once they arrived in the New World were mostly heinous — rape, plunder, pillage, etc — the ways in which they described these acts were actually fairly romantic. “The evidence of what they did doesn’t match their narrative,” she said. That all makes more sense when you look, as Leonard did, at the books they read on the ships on the way over to the New World. They were reading chivalric romances. “So when they got off the ship, they came to terms with what they were doing through chivalric romances,” she said.

Deb realized, then, that imagining what was on the bedside table at different parts of characters’ lives could help her both in character and plot development. “What book did Rebecca Bishop put in her bag to Africa? What was Sarah reading just before or as she fell in love with Emily?”

Deb gave more examples from her new book, Time’s Convert, which focuses on Marcus Whitmore. What would Marcus have read? He was born in 1757 and made into a vampire in 1781. “I initially thought I’ll just read all the books published in that time,” as she did when researching The Jewel House (set during a time when only a couple of hundred even existed). She quickly realized that wasn’t going to work. 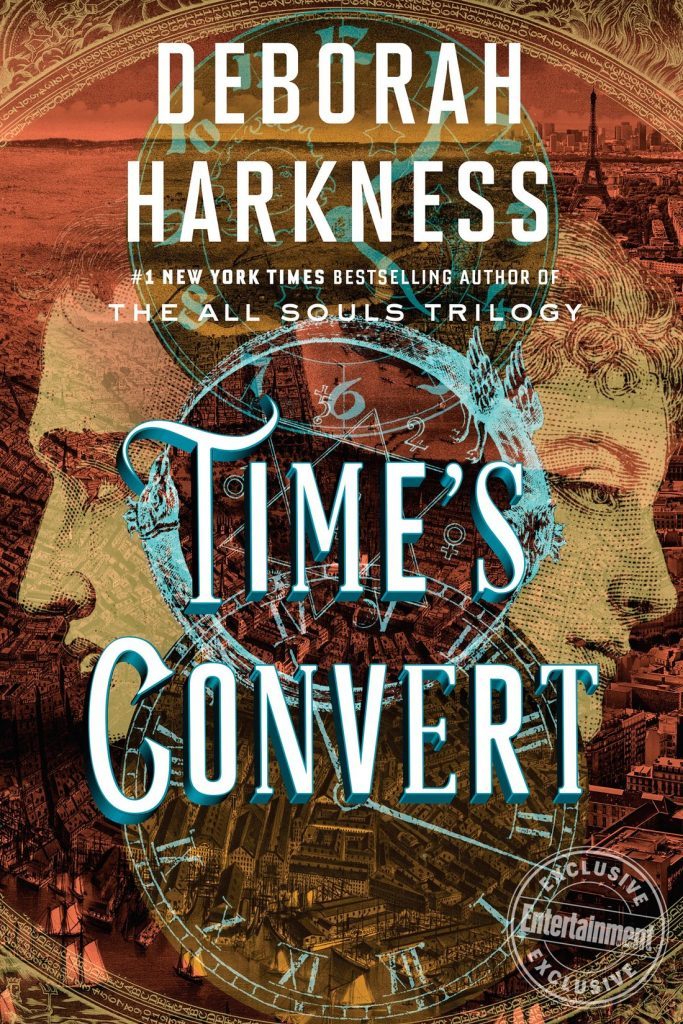 Marcus was raised a Congregationalist in Hadley, Mass., at a time when people of his class would have had a fairly high literacy rate. She started with primers, the books that would have been Marcus’ first reading experiences. As Deb read, she realized he would have learned a lot of words like king and queen, that his initial vocabulary would have been very monarchy-focused. To help her better understand his childhood and influences, she created a one-page sheet of what he would have read to see how that began to inform his child’s view of the world.

From there, she moved on to almanacs, which were ubiquitous and plentiful. “Everyone had an almanac,” she said. And, she learned, when the new one came along, the outdated one made handy toilet paper. Waste not, want not.

Newspapers were next on Deb’s reading list since it was a time of great political turmoil and Marcus would have wanted to keep abreast of the news. While today’s readers might assume that the front page of newspapers would have been peppered with information about the revolution, in reality, politics, Deb discovered, more likely went on secondary pages. Page one was reserved for the practical — information about which ships had arrived and what goods they were carrying, as well as advertisement for lost horses, runaways slaves. “It focused my way of thinking about the period,” she said.

The 18th century was also the great age of the novel. Unlike Matthew, whose access would have been mostly religious, Marcus could have read Robinson Crusoe. “A whole personae clicked into place,” she said.

Marcus, like virtually everyone else who could read in the colonies, also would have read Thomas Paine’s Common Sense. Begun as a column in the newspaper, this treatise is more than simply an a call to arms of sorts. “It articulated a vision of democracy, shared social views and ideas about family. It evokes government as a father of sorts,” she said. “Suddenly Marcus’ whole life made sense. I realized he would have had Common Sense on his bedside throughout the war. It’s the story he’s been carrying through his whole life. You can see how he felt extremely let down by the de Clermonts and their views of democracy. It wasn’t until I read Common Sense that I saw how fundamentally different Marcus was from all the vampires he had to hang out with.” No wonder Deb chose a quote from Common Sense for the title of her new book on Marcus. “Time makes more converts than reason.”

How has reading changed your life?
Are there certain books that have adorned your nightstand during different phases of your life?
What’s your most memorable reading moment?

2 thoughts to “Deborah Harkness: Are You What You Read?”